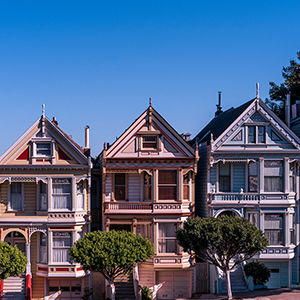 (You can also follow us on Instagram for a daily devotional thought from each Chapter-a-Day chapters: www.instagram.com/southplainscofc)

Jesus became human and built a house on our block.

First, he is both fully God, but also became human. John begins his gospel writing about the beginning (you get echoes of Genesis 1 here). While John does not immediately identify the entity he is writing about as Jesus—he calls him the Word—we read that he was with God from the beginning and through this Word, all things were made. There is a sense of sovereignty in these words. This man helped create the world, meaning he has a hand in ruling the world, as well.

After a brief interlude about John who would witness to this one called the Word, we read that the Word became flesh and “made his dwelling among us.” I like to say that Jesus became human and built a house on our block. Think about the people who live around you. While we live in an increasingly disconnected society, my guess is that some of your neighbors are friends and you through the years have learned about their families. Perhaps you even do things socially with someone who lives on your street. This kind of relationship is a far cry from knowing “about” someone or even just reading a description of them. Jesus came to be one of us. As a result, he knows us and what it means to live a human life. We cannot dismiss that as just trivial information.

Second, we learn that while John is not the Messiah, Jesus is. When the Jewish leaders seek out John to ask him who he was, he is emphatic in his response denying himself as Messiah. (In the Greek, you can create an understood subject just by using a specific verb form. However, when the speaker or writer wants to be emphatic, you include the subject, so it reads more like: I, I am… or in the case of John: I, I am not the Messiah.) Why would John be so emphatic? Because he wanted all the attention to go to the one who WAS the Messiah, and that was Jesus. As great as John was, there was one even greater coming after him.

The last thing John tells about Jesus in the first chapter of his gospel is that the role of Messiah—remember this is Jesus we are talking about—was to be the “Lamb of God, who takes away the sin of the world.” (v. 29, and also in 36) Lambs were used as a sacrifice, including a sacrifice of atonement. Lambs were also central to the Jewish Passover, which was a celebration of a moment in Israel’s history when God rescued his people from slavery and bondage in Egypt. (See Exodus 1-12 for more.)

Why is Jesus as Lamb of God important? Remember yesterday we discussed Isaiah describing a voice calling in the wilderness to prepare for the coming glory of the Lord? Well John (the Baptist, not John the author of this gospel) describes himself using these same words. He is, he says, the one who is preparing the people for the One to come. This Jesus, in flesh and living among us, offers us salvation from sin. He rescues us, much in the same way that the people reading Isaiah would have seen God’s rescue in Isaiah 40.

When you hear the term “Messiah,” what are your first thoughts? Do these describe the ways you typically thing of God? Why or why not?

How have you discovered attempts to rid your life of sin to be much like New Year’s Resolutions: great ideas in principle, but a lot harder to accomplish than you originally thought, perhaps even impossible? How does the idea of Jesus being the Lamb of God “who takes away the sin of the world” help you better approach an understanding of salvation from God? What would be one way you can live more of an understanding that Jesus saves you, versus you save you?

Ask you children to describe to you their picture of God. In what ways does their image include an understanding of God/Jesus becoming flesh? How can you do a better job of living a life that shows them Jesus acting in and through you?