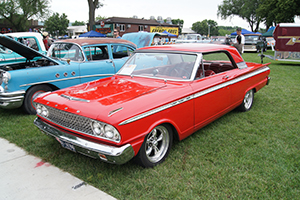 My senior year of college, I bought a 1963 Ford Fairlane Sports Coupe. By definition, it was a classic car. It was a two-door hardtop with a 289 V-8 engine in Rangoon Red. At least it was originally Rangoon Red. The man I bought it from painted commercial road equipment and had repainted it to “original colors.” I had my doubts. No worries, however. I paid $800 of borrowed money for it and as far as I was concerned and what I proudly announced to my father was that it was the best purchase I had ever made.

Dad had his doubts.

He might have even pointed out some of the reasons he thought it was not the best financial decision I ever made. Like the fact you had to help the windows roll up. Or that you had to carry around a screwdriver to “unlock” the trunk (because it had no lock). Or the fact that the doors did not lock. Or that the speedometer did not work, nor did the gas gauge. (I had to fill the car up about every 4 days just to be safe.) The muffler fell off somewhere between Brownwood and Austin one time on a trip home. When we fixed the muffler, we discovered the rear suspension had been missing a bolt, probably since I purchased it. His most valid point was that I always had to park someplace I could face outward, since reverse did not work. Eventually, first gear also went out. When second gear went out, I decided there were not enough places you could park facing downhill in Abilene, Texas, so I sold the car for $500.

If my dad asks, I still tell him it was the best purchase I ever made.

But it wasn’t. I just couldn’t bring myself to admitting it.

When I read Proverb 14.9, I cringe and am reminded of the importance of owning up to my mistakes.

Fools mock at making amends for sin,
But goodwill is found among the upright.

Maybe purchasing that car was not a sin, but the principle is still the same. Make amends for the things you need to make right. No one likes a fool.